It was announced yesterday that a new Harry Potter book was going to be published. At least, that’s what several media outlets announced (USA Today, CNN, and The Washington Post, just to name a few). I saw the news via Twitter, in a tweet from @pottermore: 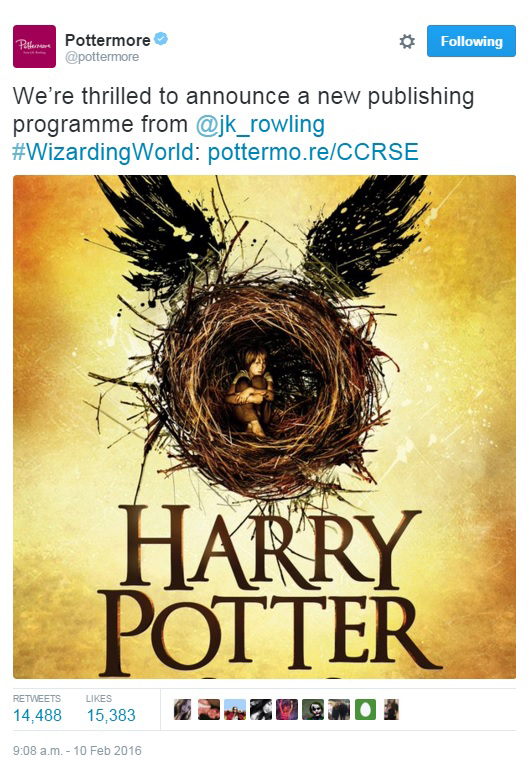 Because of the link, image, hashtag, and J.K. Rowling’s Twitter handle, there wasn’t much room for a super clear in-tweet announcement, as you can read. Clicking on the link brought me to the actual announcement, with actual factoids about what is really being published. The play script. As in, the script of the play that is premiering this July in London.

Now, on my personal Facebook page as well as the countless Tweets about this news, I met a lot of disappointed posts and misinformation that I wholeheartedly blame on headlines from media like the ones mentioned above. No, J.K. Rowling has not written another novel; it is being published as Part I & Part II in the same book because that is how the script is divided.

Don’t mistake my discontent towards the [clickbait] headlines as disinterest in this announcement. I’m psyched that I’ll be able to at least read the play, since I will not be able to make the jump across the pond to actually see it. I’m so happy J.K. Rowling is part of this publication, and I can’t wait to obsess over it in the same ways as I did/do over the Harry Potter novels.

I have become more and more annoyed with clickbait headlines, and this one really just put the cherry on top of that annoyance, which I thought had already been done with the uproar over the CDC’s new warnings relating to alcohol and pregnancy – mainly due to people hitting share and typing some fact-less statement before even reading the warnings and understanding them.

My annoyance has a direct correlation to my snark and sarcasm, so I’ve thought of a few *fake* headlines and their follow-ups, and present them to you now in true media fashion: first, a clickbait headline, then the day after headline that really should have been the first choice.

This isn’t really news, but let’s twist the words so people think it is. Oh, and throw in something about public health.

Popular swimming hole infested with contaminants? Neighbors tell us what they saw.

Should we portray parenting/Moms in a positive or negative light today?

The main message could fit into the headline, but nobody will click on that!

Could your music be killing you? Stop it with these tips.

Doctors warn listening to music too loudly through headphones could damage eardrums.

Celebrity owns Other Celebrity in an epic Twitter battle.

Let’s make a video of someone doing an ordinary thing and make it go viral so they know how much they are worth as a human.

What this sibling did was so kind! Watch video here:

Click on those articles, friends, and actually read them (I know, crazy proposition) if you are thinking about sharing or discussing, or really doing anything at all with the content. Language is a beautiful, flexible thing, but sometimes it is used to get you to click and get whatever entity some cash money. Well, maybe not cash but definitely money. Misinformation [in the media] hangs out on the edge of ignorance, and is great friends with misleading headlines, and I think we can agree that the internet, our friends, and humanity could use less of all of these things.